The following issues have already been repaired for the next release:

The following issues were identified in Tweenster V3.02 and have been fixed in 3.03.

The following issues were identified in Tweenster V3.01 and have been fixed in 3.02.

The following issues were identified in Tweenster V3 and have been fixed in 3.01. 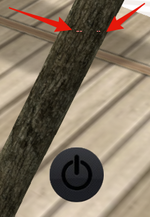 Artifacts when the HUD is minimised

When the HUD is in "minimised" mode there are sometimes some tiny pixels visible on the screen (artifacts).

This is not unique to Tweenster (also visible on the HUD by TMP, for example).

We try to minimise this as much as possible, but some may still experience it.

The small pixels are a result of floating point errors in the shader. The planes on the HUD should be perfectly rotated away from the screen so you can't see them, but due to a very small mathematical error, sometimes the shader renders a single pixel).

To fix this we'll need to either move or alpha every single link on the HUD when the hud is minimised and restored, which will slow it down significantly, especially on heavily loaded regions.