Difference between revisions of "CasperVend v1"

CasperVend v1 is the predecessor to CasperVend2. The v1 system was released in September 2010, and was taken off sale in January 2012.

What Version am I Running?

If you have purchased - or updated - CasperVend since January 2012, you are NOT using CasperVend v1.

The v1 vendors are easily recognisable since they are distributed with a black theme. If your vendors came with a white template, you are using the new (v2) system.

Here is a picture of one of the V1 vendors: 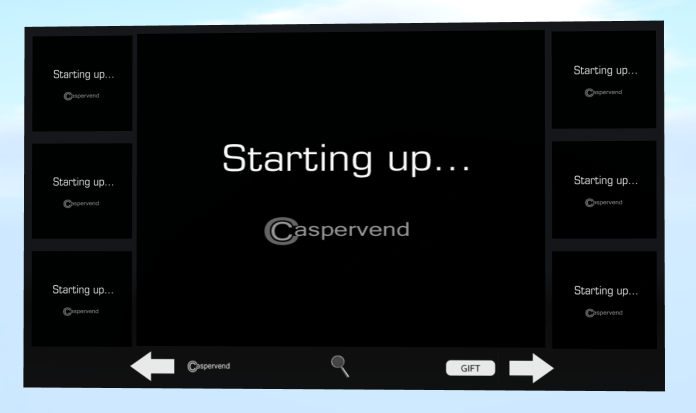 CasperVend offers a 12 month service guarantee on all vendor purchases. As of January 2013, we fulfilled this 12 month obligation to all of our v1 customers, and therefore began decommissioning the v1 vendor network, as previously announced.

The equivalent v2 vendor system is a FREE upgrade to ALL CasperVend customers - and all your existing data on the website will automatically work with v2.

The v1 system was retired over a few months. This was a gradual decommissioning, as follows:

All v1 vendors - affiliate or non - and DropBox(es), when rezzed out, will now give only this message:

If you are the original merchant of the vendors

Q. Why can't I just use the UpgradeBee on the v1 vendors anymore?

A. The v2 vendors have been rebuilt and redesigned from scratch, with the buttons and panels using a different system, and therefore it is not possible to update to v2 using the bee. You will need to rez new vendors and point them to the existing listings. (You will NOT need to redo anything in your existing listings - just point new vendors to old listings.)

If you are the affiliate/franchisEE

You will need to contact the original merchant for a set of updated vendors. You are NOT able to update v1 vendors to v2, as doing to requires access to the CasperVend account to point the new vendors to the old listings.